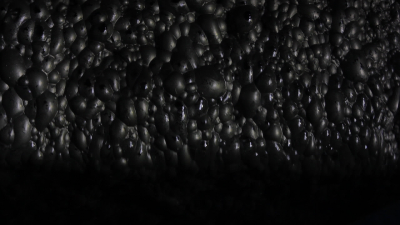 As the bright colours from the glory days of the 1960s slowly fade in Majdanpek, Eastern Serbia, the only thing that hasn’t changed is the dominance of the local copper mine. Both a giver and taker of life, the mine is central to the local industry but a major threat to the local culture, as it spews out layers of toxic dust over the plants used for traditional medicine and magic spells. 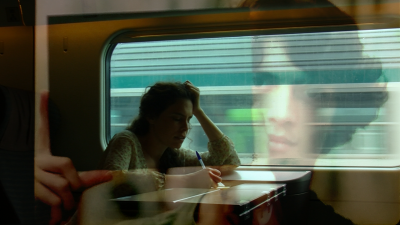 I’m in my forties, I’m a woman, a filmmaker, Cuban. I’ve been living in Spain for 18 years. I recently returned to Cuba and I became obsessed with a man. I chased him around the city until I realized I was chasing a ghost. Alberto, that’s his name, looks a lot like Fabio, my first love. We were going to start studying film together when Fabio drowned in an accident. Twenty years later, Alberto appears to make me realize that Fabio’s absence still hurts deep down. What I experienced during those days frightened me. I tried to remember Fabio, us together, but I found nothing to hold on to. I felt foreign inside my own body, as if I had not been the young woman who loved and lost Fabio. I return to Spain tormented by guilt. I lock myself inside my house and force myself to remember. Little by little I discover the impact of Fabio’s appearance in my life and how his absence transformed me into the woman I am now. 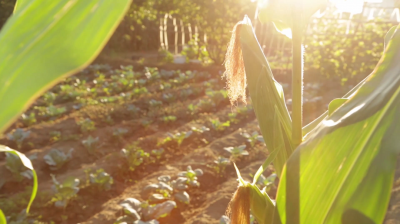 Garden is a film about the last urban guerilla gardeners in Skopje, who after 35 years of gardening on an uninhabited public land, near the river Vardar, are now faced with construction and implementation of urbanistic plans. They are forced to seek another land. Considering that these people are now retired and in a period of life where one easily becomes inactive and lethargic, the gardens present a big motif for getting out of bed, for sustaining and prolonging their previous working routine. The physical activity and the pleasure from working in the gardens, still maintains their health vital and in good shape.

HOW TO TALK TO LYDIA 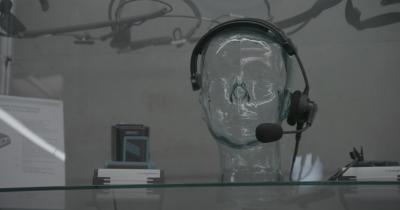 Developments in artificial intelligence, robotics, automation and emerging technologies are increasingly shaping the future of work across the world. But these technologies also become tools of moral improvement and emotional attachment. Working at the company with an artificial intelligence is not just an occasion of economic labor, but it is most importantly an effective and ethical experience. Human-technical relations often become entangled with anxiety, doubt, mistrust as well as care, nostalgia, and love. 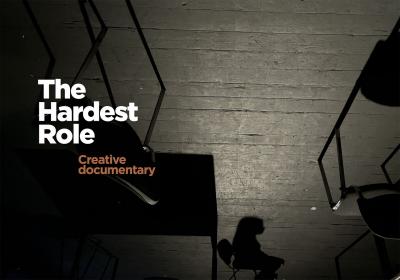 Serbia continues to live in the darkness of patriarchy under whose auspices sexual harassment and abuse continue to normalize or cover it up at all costs. We, the women in the performing arts, are constant witnesses or survivors of the same relentless phenomena in our profession. The role of a victim is the role that the actress is not choosing, it chooses her – by the will of a predator: a director, producer, another fellow actor etc. We have decided not to “play” these roles in private anymore but to put a spotlight and stage them. The film will follow five actresses and a female director in an attempt to make a theater performance out of their and other women’s experiences. The film will follow them in their attempt since theatres in Belgrade may not be ready for this topic and may refuse to host it.

In spite of the idyllic village life, a family of three is tormented by their past mistakes.

JOURNAL OF THE LOST TIME 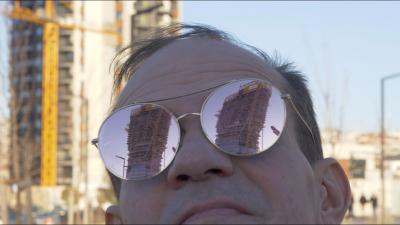 “The Journal of Lost Time” is a documentary film which re-examines the relationship between two individuals throughout the past decade. Documenting the changes of the look of Belgrade and guided by his own intuition, Raško Milatović – the author of the film – goes on a journey of self recognition with his camera by randomly filming the city sights of Belgrade (where he lives). In 2010, at the beginning of that journey, 25 year old Raško accidentally met a multimedia artist from Belgrade – Johnny Racković. At that moment Johnny was a 42 year old eccentric character who started skateboarding again for the first time after his adolescent age. 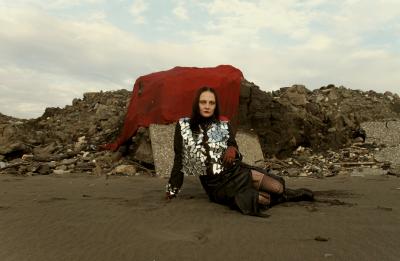 Keren Batok is a female poet, singer and a performer. She lives with her parents in a small village in western Georgia. But her daily life is very different from other villagers. She records herself singing in the bathroom – the quietest space available. For the music videos, Keren asks her parents for help, most of her videos are shot by them. In her homeland Keren is not known and she never has performance offers there. But, After her music video hits more than 100k views, she is invited to tour in some European cities.

LETTERS FROM THE PERIPHERY 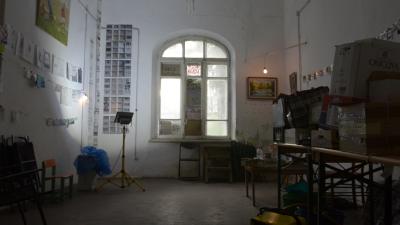 In the light of the saddening disappearance of cultural and public spaces in my city Chisinau, I started writing to find a new way to express my feelings towards my hometown. Starting from the idea that in order for a periphery to exist, there should be a center, which in this case is the government with its (corrupt) political and decisional structures, I began writing letters. These being melancholic letters, with a tone of anger and frustration, addressed to my city as if it were an entity, a being that could actually give a response.

LISTENING TO THE WORLD 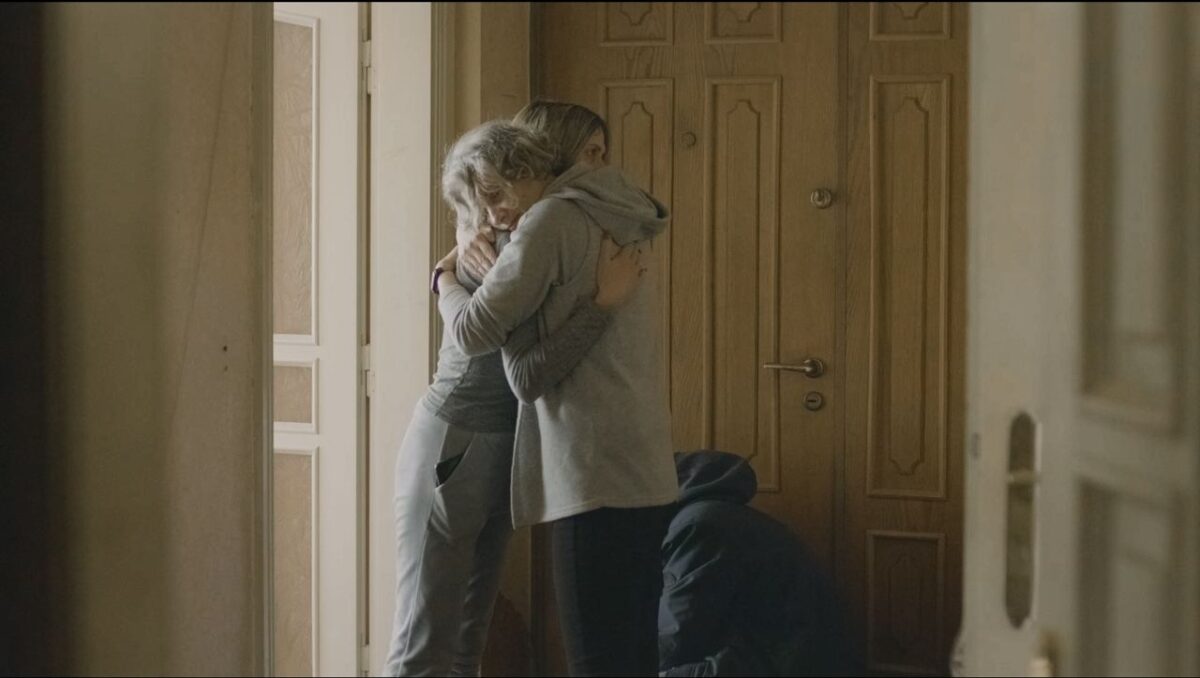 IVA is a person with a disability,she was losing the opportunity to hear from the moment she was a child,but she remembers how to speak.This circumstance influences all fields of her life, especially communication with people around her.Iva is an active human rights activist fighting for the rights of people with disabilities and art curator, performer.She picks hard and painful topics for art projects such as domestic violence,depression,and self-harm.Iva believes in the therapeutic potential of art.Iva communicates with the world in an unusual way.To communicate with people she uses the program on her smartphone that transcribes speech into written text. 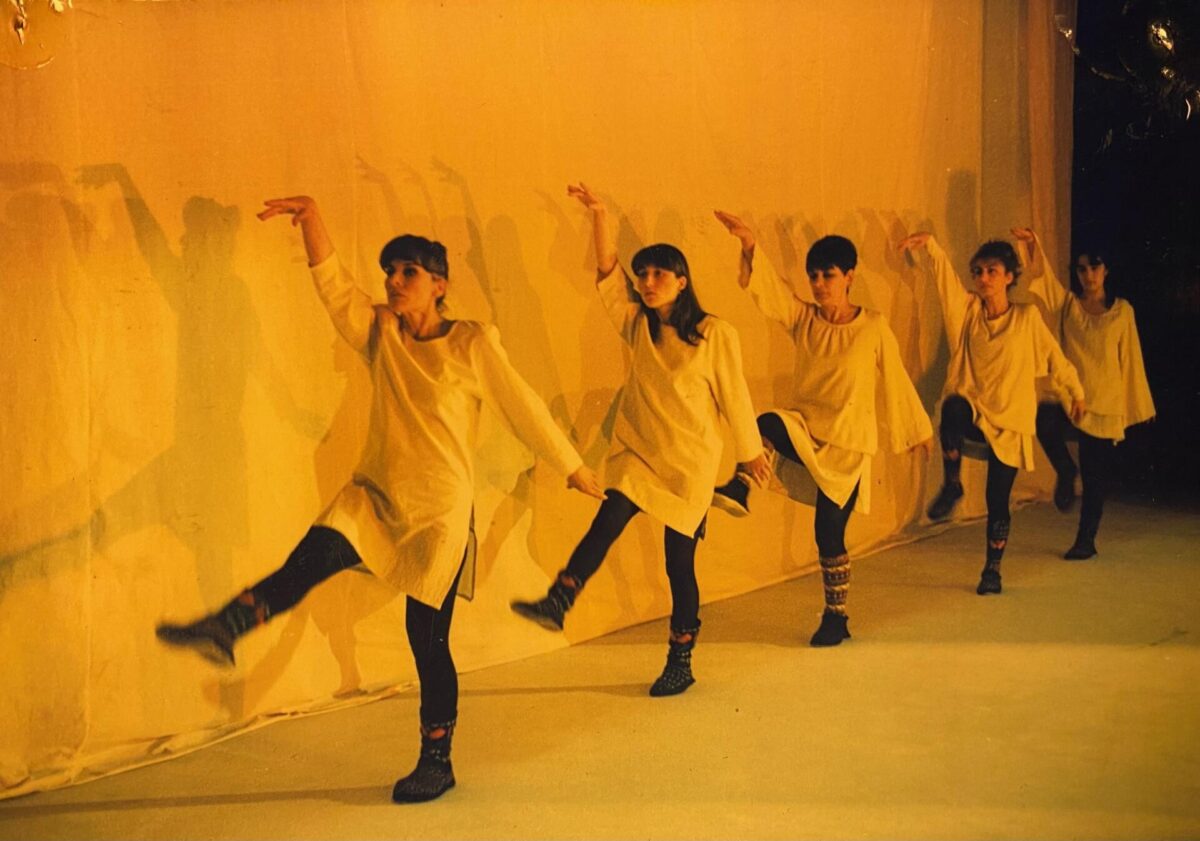 In 1996, my grandmother Nana moved to a small, provincial town overlooking the Caucasus Mountains. Her mission was to stage performances and bring audiences back to a cold, abandoned, ruined theatre. She fulfilled her mission, reviving the theatre with four performances, bringing actors back to the stage, filling the hall, and bringing new life to a town which, like the rest of the country, was struggling through the dark times of post-war Georgia. Georgia was a post-apocalyptic place: no electricity, no gas, no water, no food. The reality of the ‘90s is well-represented in Nana’s performances; the theatre group had to perform in absolute poverty and hunger, without any salary or future. The film will tell the story of women fighting for survival in a post-war reality through the art of my grandmother and the life of an actress who had to sacrifice her art in order to survive 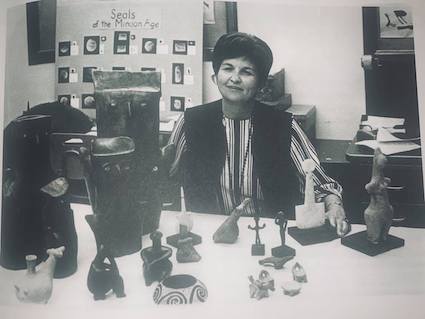 In the fields of Turkey and Bulgaria in late 1970s, a Lithuanian born archeologist Marija Gimbutas finds hundreds of round-shaped female figurines. While fellow male archeologists call them just ancient pornographic images, Marija puts her most defining theory about the birth of Old Europe forward: that there once was a peaceful, matrilineal society that worshipped female god and left these figurines behind. She suggested a historical narrative that was ideal in many ways, where men and women lived in harmony, men performed physically heavy duties and protecting the tribe, meanwhile, women ran temples and held governing positions in the society. Her theory creates controversy – her colleagues reject the Goddess theory, Marija loses friends, and her credibility. However, at the same time, Marija becomes an icon of the 90s spiritual movements. Her books sell out, feminists, artists, activists – Al Gore and Jane Fonda included – call Marija their muse. But what is the bridge between us and the female Goddess today? What if Marija’s theory would be accepted as a historical truth rather than the myth? 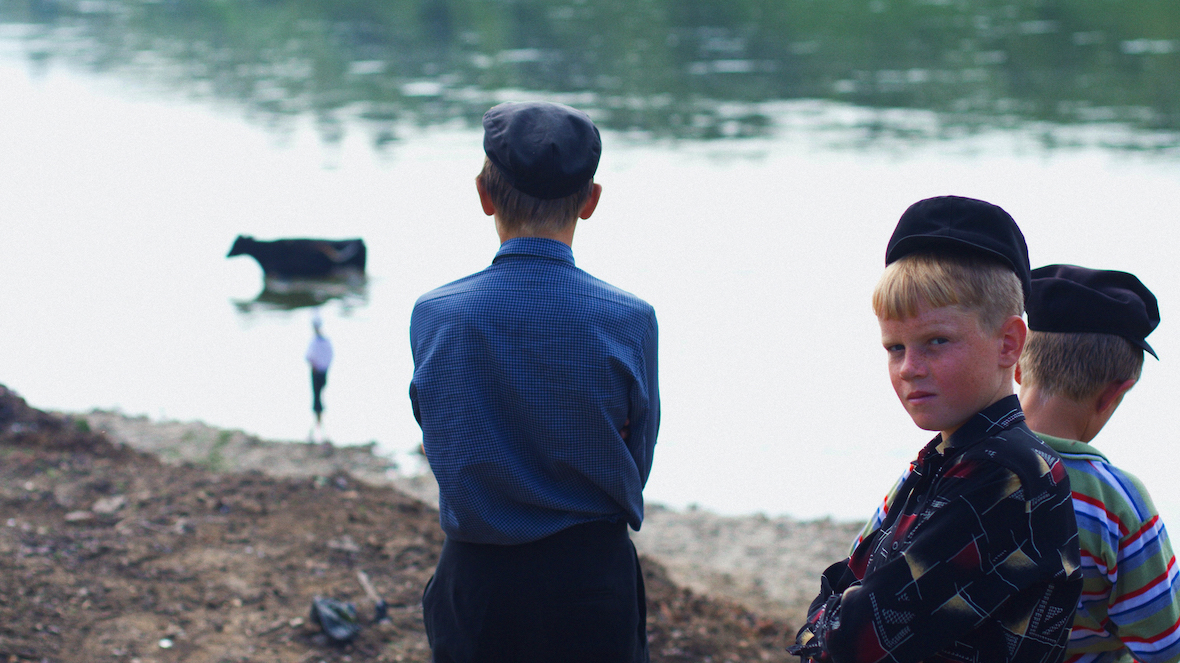 The most peaceful community in Ukraine lives in the beautiful canyon of the Dniester river. They cannot take up arms because of their religious views, but they need to cope with the consequences of regular floods and unexpected war. 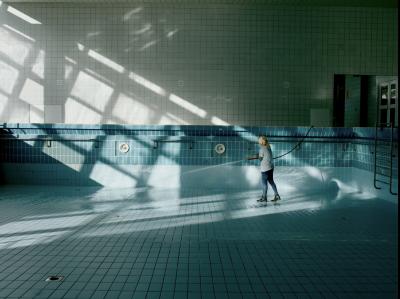 Sunset is a feature-length documentary focusing on the life cycles in the physical therapy resort in Montenegro and the repetitive physical action that takes place against the backdrop of the hotel’s exemplary architecture. The institute welcomes guests from all over and serves as a centre for healing and physical improvement, but its location in the Balkans renders it a bridge – between disparate worlds, people and ideas. It is a place uncommon in its purpose of promoting human understanding through shared aerobic routines, where the prevalence of touch and physical intimacy. 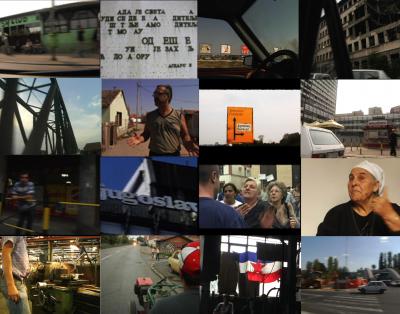 Tranzicija/Transition Zrenjanin follows the struggle of the predominantly women workers of the former pharmaceutical factory Jugoremedija in the town of Zrenjanin over the  course of 16 years. Jugoremedija  was the first factory during the Serbian transition to capitalism of the 2000s to have its privatization overturned and returned to worker control following a nine-month factory occupation and three-year strike. Intricately tracing the story of the battle for Jugoremedija, the film offers a microcosm and an essayistic anatomy of the postsocialist transition for the wider post-Yugoslav region and globally. Sitting at the edge of essay film and social documentary, the film is at once a bracing document and a moving parable of the tranzicija. The voices of the Jugoremedija workers carry urgent resonances for the wider predicaments we face regarding the future of labour globally.

WE ARE PRETTY LOUD 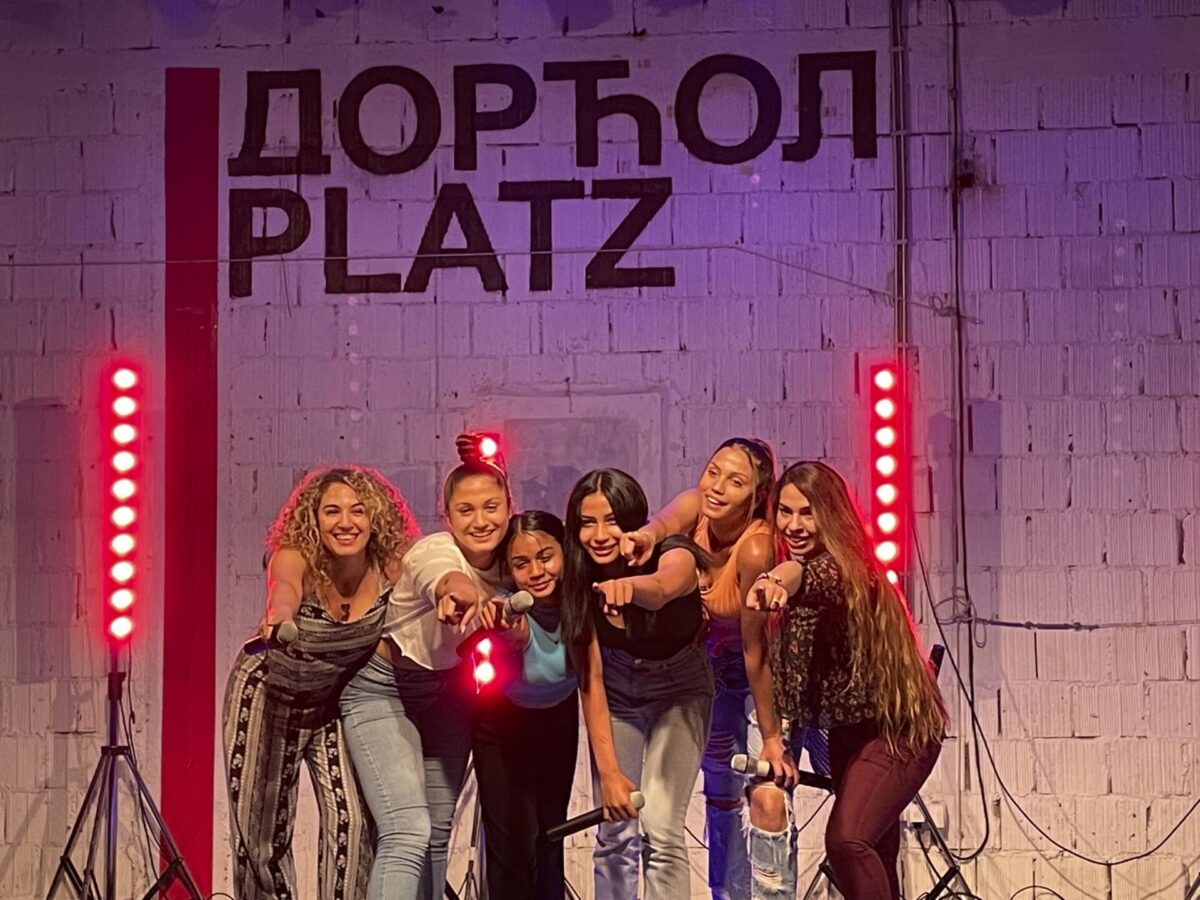 Pretty Loud are six young Romani women from Zemun using rap music to fight two battles: against ongoing prejudice towards Roma people in Serbia and worldwide, and for the rights of women within their own tight-knit, patriarchal community. With potent lyrics and stirring Romani melodies, the band is upending stereotypes and creating new paths for repressed women everywhere. They rap against child marriages, violence against women, segregation and racism. Our documentary film follows Pretty Loud as they try to find success as a band while also contending with the challenges of their daily lives. Each of the girls individual stories will be interwoven with the trajectory of the band as they are catapulted into more and more popularity with each passing month and recognized for both their talent and their activism.

Al Jazeera Balkans Award – 2000 EUR
The Beldocs Industry Award by Al Jazeera Balkans is granted to the authors of the best pitch of Beldocs in Progress decided upon by an international jury consisting of industry representatives.

DAE – Documentary Association of Europe Award
The DAE Award consists of free memberships for one year for the director(s) and producer(s) and a tailor-made consultancy session with DAE senior consultants. The prize is a talent encouragement award and offers access to the European documentary community.

East Silver Caravan Award
One project from will receive the festival distribution support for one year, starting after its completion. Through East Silver Caravan it will be submitted to international film festivals for consideration and Institute of Documentary Film will help with the overall festival strategy.

Pitch the Doc Award
Pitch the Doc Award, is a prize given to boost the progress of the credited project, providing it with dedicated curation and support in building international recognition and visibility. Consultation is held by an expert associated with Pitch the Doc and takes place within 6 months of the Award announcement, provided that the project is successfully validated on the platform.