Beldocs in Progress (BIP) is a platform to present international documentary projects in progress from Western Balkans, Georgia, Ukraine, Moldova and Baltic states to international industry representatives. The aim of this section of Beldocs Industry  is to support production and post-production of documentary projects from the above countries by presenting them to festival programmers, sales agents, distributors, TV commissioning editors and potential co-producers. The programme of Beldocs in Progress includes public pitchings (this year held in digital format), including screening of selected scenes of participating projects, followed by one-to-one meetings with industry professionals. 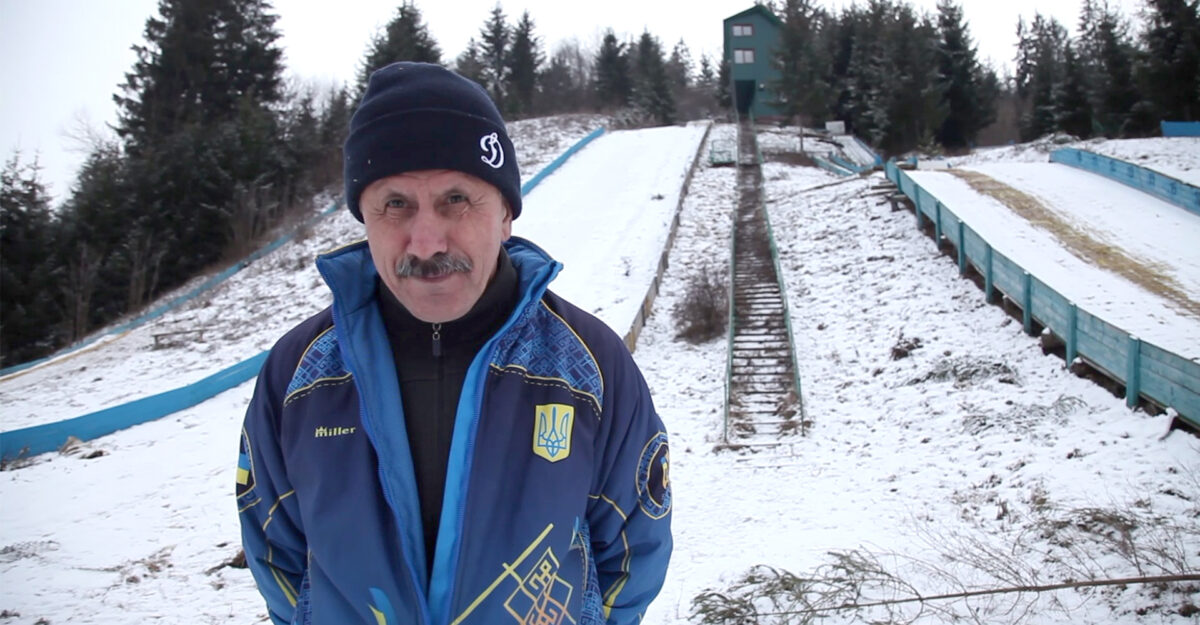 Logline A story of a ski jumper who does not know how to land.

Synopsis Vasyl is a professional ski jumper. After six years of his active career, he had an injury. Vasyl became a professional trainer and now has a unique approach to children he works with. He teaches them to cope with fear and self-doubt. The conditions of the available equipment and ski jumping hill, in the sports school, are far from ideal. Vasyl is fighting with the reality he is trapped in. He is a restless dreamer and this makes him the main antagonist of himself.

Director’s biography Max Rudenko was born in Mykolayiv, Ukraine in 1975. In 2009, he graduated from the School of Cinema and Television, where he studied Documentary Film Directing (in the workshop of Marina Razbiezhkina). He continued to study at the Gerasimov State Institute of Cinematography (VGIK), the Cinematography Department (class of Igor Klebanov), and graduated in 2015. After graduation, he returned to Ukraine and worked as a film director and cinematographer. 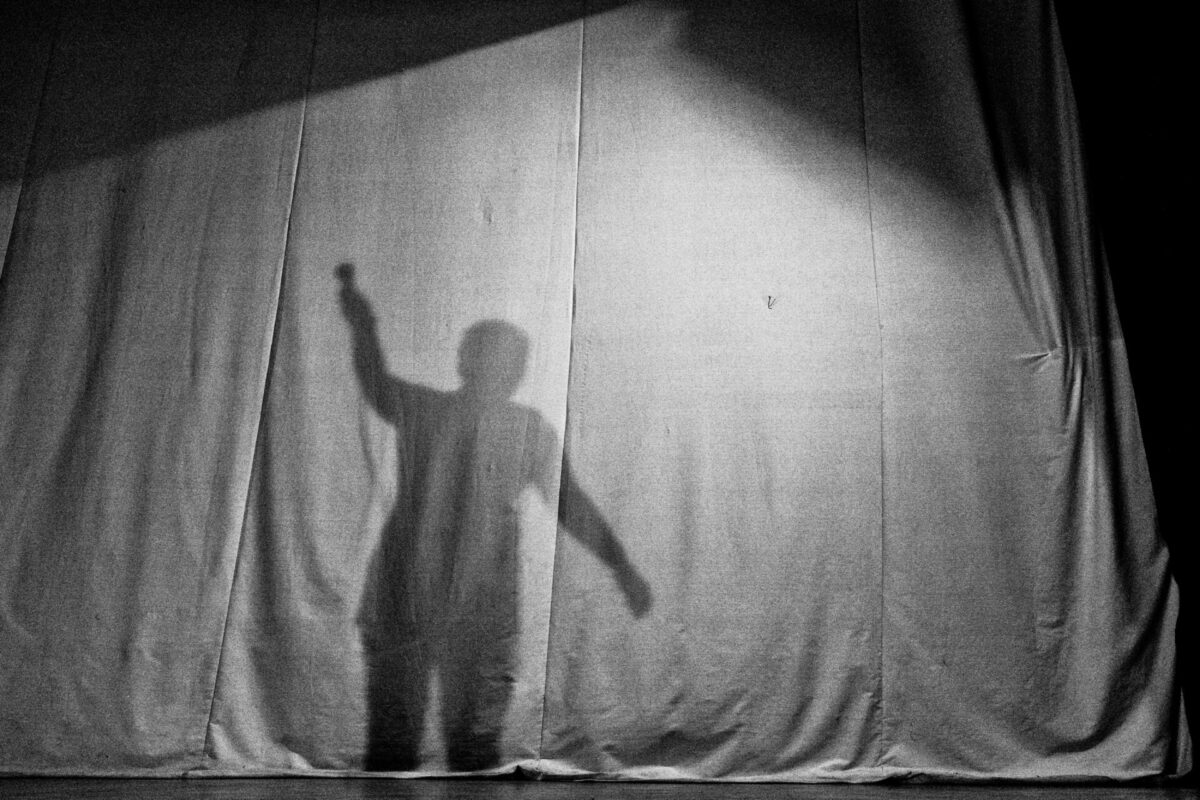 Logline For some in a mental hospital being on stage is being alive.

Synopsis Those who happen to get into a mental health institution strive to leave it as soon as possible. Having come here, Serhiy not only stays there – he starts his own theatre. Patients and amateur teens work together at staging the play written by one of the patients, called ‘The Elf’s Tower’. Serhiy is an elf from a metaphoric tale – he saw there not just patients, not mentally challenged people, but unique, special persons. He rip them out of the cage of prejudice. But is it easy to be an elf in real life?

Director’s biography Graduated from Kyiv National I.K.Karpenko-Kary Theatre,Cinema and TV University as a film director in 2010. Works with feature and documentary projects. Polina Kelm played as an actress in the film by Alexander Balagura ‘Lifespan Of The Object In Frame’ (special mention at the FIDMarseille) in 2012.Her documentary ‘Positive’ was made with support of The Ukrainian State Film Agency in 2014. 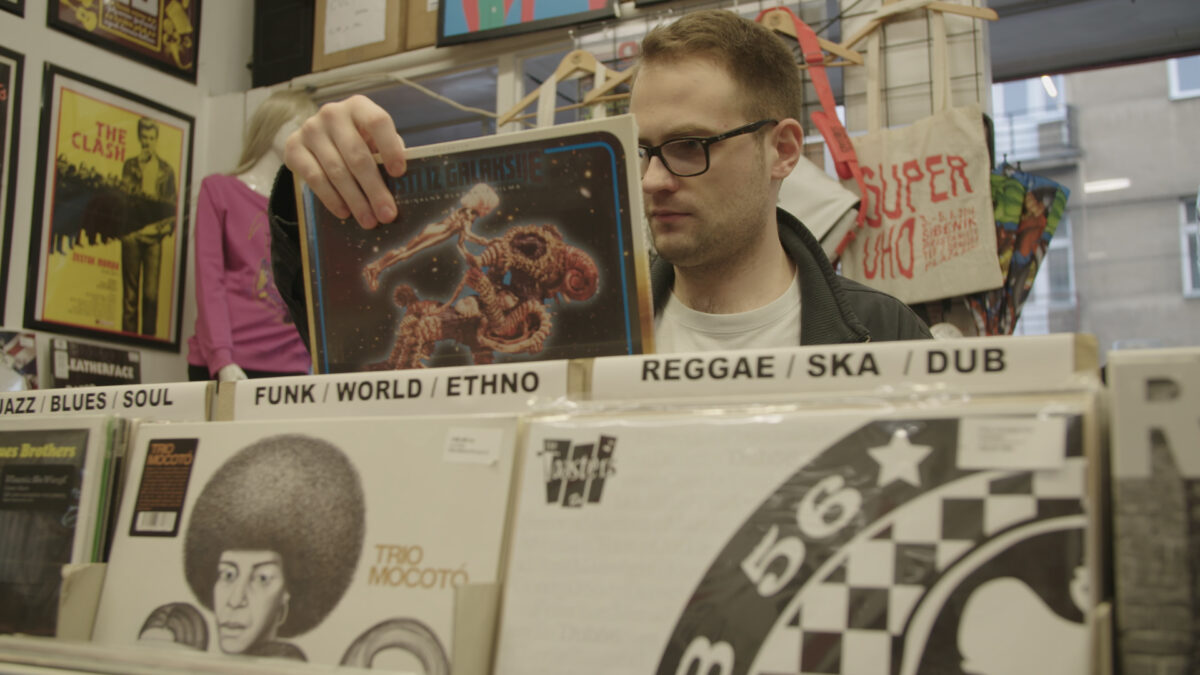 Logline A DJ wannabe’s epic journey into the vinyl-digging culture of former Yugoslavia.

Synopsis Franko is trying to find a specific record – the single of Ulica Jorgovana, since, as one of Franko’s interviewees, DJ D-GREE, explains, the B-side has a song that is the quintessential example of Yugo-funk. Franko is certain that without this record there is no film, since it is so important in terms of music and collecting. As the Narrator/Jerko gloats, Franko is expanding his search to distant countries and he meets various interesting characters along the way.

Director’s biography Franko Dujmić is a young author born in 1990 in Dubrovnik, Croatia. He holds a BA in film editing and MA in animated film from the Zagreb Academy of Fine Arts. Since 2010, he has been a member of Kinoklub Zagreb and a member of the Croatian Society of Filmworkers from 2016. He enjoys writing films, making films, watching them and having an opinion about them. Franko also considers himself a professional music connoisseur. 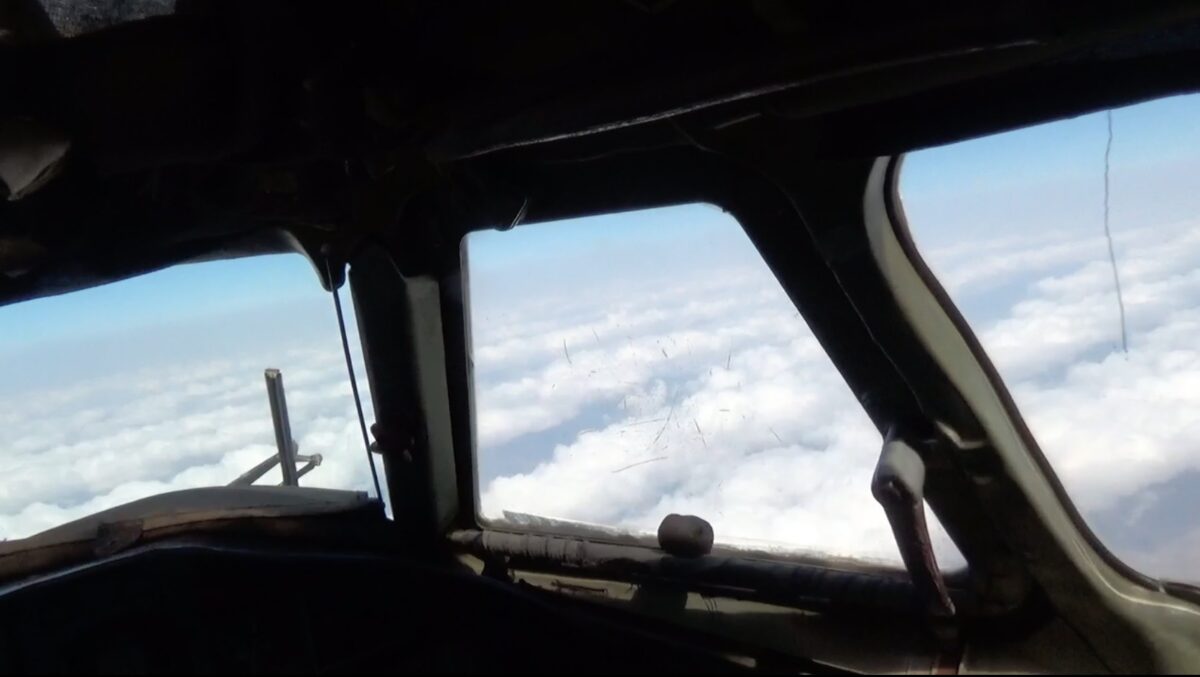 Logline My father is a pilot in Africa. It’s been 15 years and I’m still wondering if he’ll ever come home.

Synopsis Looking to reconnect with my estranged father, a former Aeroflot pilot nowadays flying cargo in Africa, I embark on a journey from Moldova to South Sudan to explore the meaning of family and the collective post-Soviet trauma that turned parental absence and mass-emigration into my country’s foremost issues. “Landing” combines domestic conversations with my family, my father’s amateur footage, the long-distance communication between him and me, archival home-videos and present-day footage.

Director’s biography Ksenia graduated with a BA in Film &amp; Theater Studies at FU Berlin before adding a BA in Film Directing (Film University Babelsberg) to her education. Her experience in the film industry includes participation in numerous workshops (BDC Discoveries, B2B Doc Workshops, MOLDOX Lab, EAST WEST Talent Lab) and pitching forae as well as working for film festivals (EFM, FilmFestival Cottbus). With her directorial debut-in-progress LANDING, she has received awards like the goEast Development Award, a Crossing Borders Grant and maecenia Foundation Grant among others. Additionally, she’s also working on the short LETTER FROM KHARTOUM and producing the documentary ZAHARIA PROJECT. 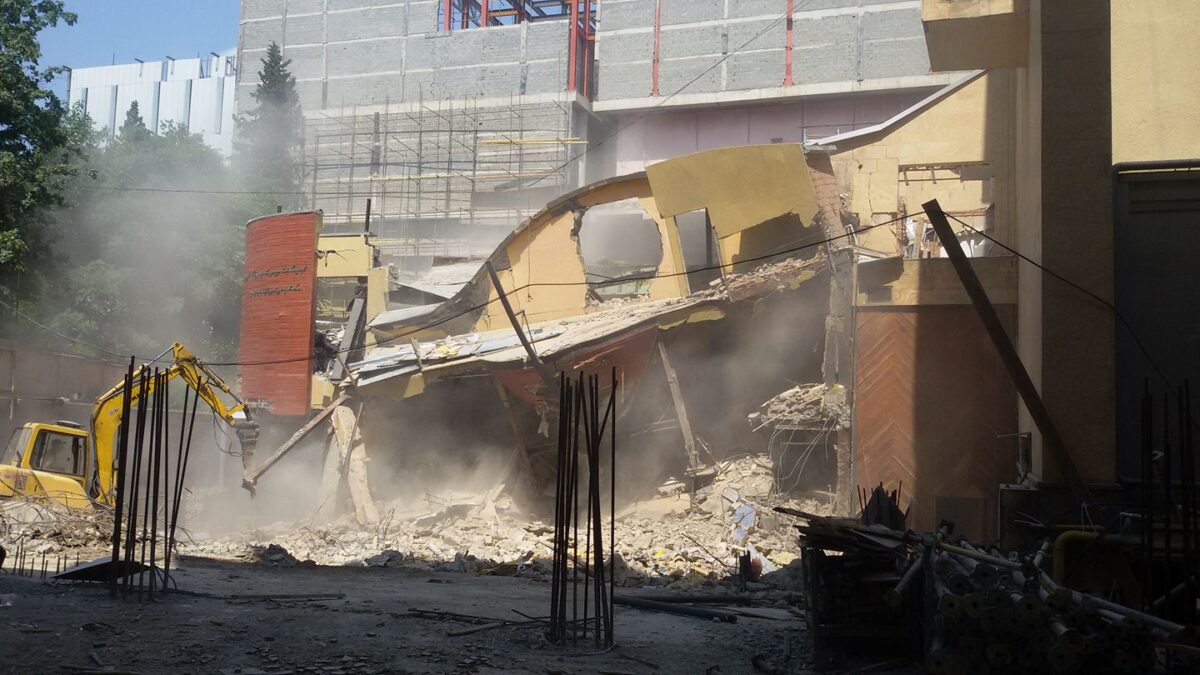 Logline How to stage a revolution?

Synopsis Tbilisi, Georgia, 2001. Poverty and crime are devastating country; power cuts and water shortage are daily issues. A severe political regime is in power. A lead journalist is murdered, while the only private channel is literally bombed. In these circumstances a private political theatre, right in front of the government building. The first show is about social issues and politicians are mentioned as thieves. The second show is a censored play about young boys murdered after President’s order.

Director’s biography George Varsimashvili is a Georgian writer and director born in Tbilisi in 1986. After graduating university in Georgia, he went to study filmmaking in Paris 8 university (bachelor’s and master’s degree) and ESRA Paris film school. During his studies he made a dozen of short films, which traveled on different film festivals. He shot his graduation feature film “Particulier a Particulier” in 2012. Although film was only a graduation movie, it was still released in film theatres in France, Russia and Georgia. In 2019 he was invited by Bela Tarr to direct a short film in Switzerland, which was premiered at Locarno film festival in 2019.

Logline Sunny is a journey of a social researcher from door to door, family to family, behind closed doors.

Synopsis Sunny is a documentary film that revolves around an interviewer, a former teacher who now earns living by conducting interviews for social research organizations. The interviewer’s work is both interesting and extremely demanding, not only physically but emotionally as well. Social research, specifically public polls, can be considered as an opportunity for bringing people’s voices to different stakeholders, though currently it is often misunderstood and misinterpreted.

Director’s biography Keti Machavariani graduated from Tbilisi State University’s faculty of Art in 1995, and continued her studies at the State University of Film and Theatre’s faculty of Cinema – specializing in Film Direction – from which she graduated in 2002. Between 2005 and 2006 – with the help of a scholarship of the Italian Ministry of Foreign Affairs – she undertook a practical course with the Italian State television broadcaster RAI.

Logline The vertiginous rise and fall of the Slovene informational technology giant.

Synopsis Janez Škrubej is convinced that the last battle for the informational technology of the cold war was being fought in Slovenia. Nowadays, this idea makes most people smile. The documentary uncovers the background of this war. It is the “history” of personal computing, something that – together with tablets and smartphones – increasingly influences our everyday lives. The main protagonist of the documentary is Janez Škrubej, the only managing director of Iskra Delta Computers.

Director’s biography Jurij Gruden was born in 1975 in Trieste, Italy. In 1996 he entered the Academy of Theatre, Radio, Film, and Television in Ljubljana, Slovenia and graduated in film and television direction. He currently works on documentary project Behind The Digital Curtain (in postproduction) and documentary project From Sevnica to the White House (in production). 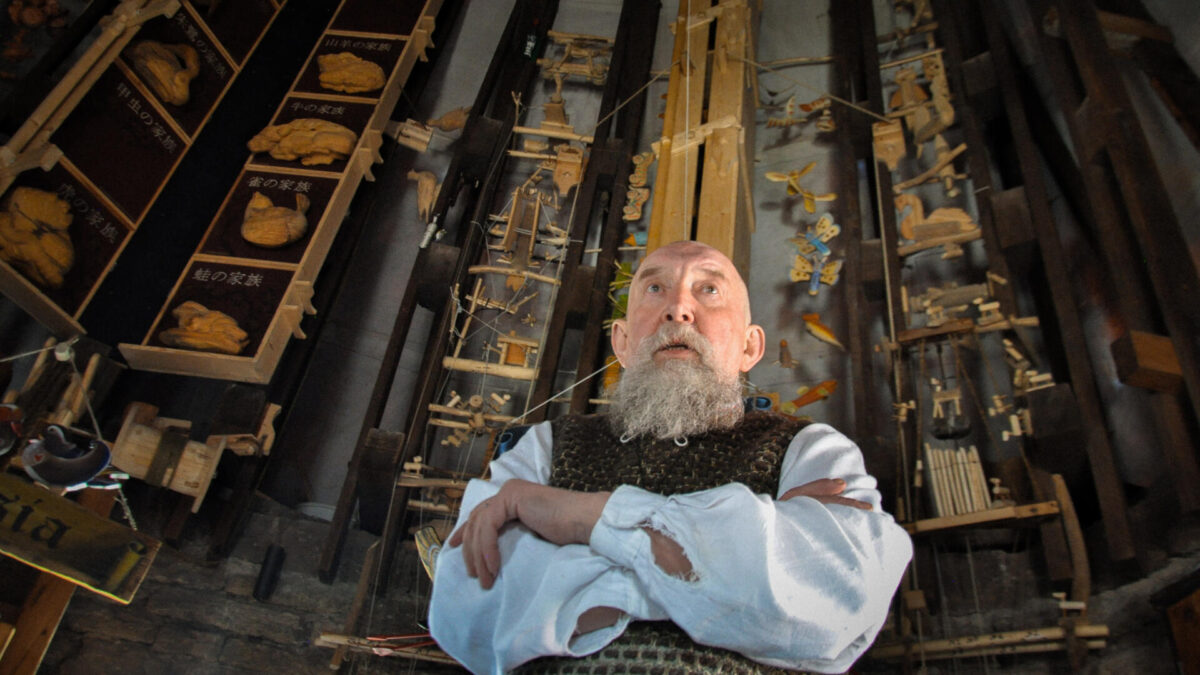 Logline It’s so easy to be dark. How we can not to be?

Synopsis The film follows a monk Anatoli who many years ago gave a vow to find something good in every day. He lives a peaceful life in Tallinn but when the war breaks out in Ukraine, as an ethnic Ukrainian, he feels he has to do something to help the people in need there. Since 2014 Anatoli has been traveling to Donbas, damaged by war, to deliver humanitarian aid. Keeping his old vow, he also makes a manuscript book about life in the warzone, based on the stories about people and nature he documented.